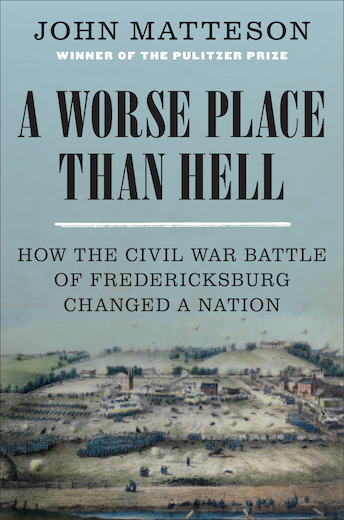 A Worse Place Than Hell: How the Civil War Battle of Fredericksburg Changed a Nation

John Matteson '83 with A Worse Place Than Hell: How the Civil War Battle of Fredericksburg Changed a Nation

The Pulitzer Prize–winning author illuminates three harrowing months of the Civil War and their enduring legacy for America.

December 1862 drove the United States toward a breaking point. The Battle of Fredericksburg shattered Union forces and Northern confidence. As Abraham Lincoln’s government threatened to fracture, this critical moment also tested five extraordinary individuals – Oliver Wendell Holmes Jr., army chaplain Arthur Fuller,Walt Whitman, Louisa May Alcott, and John Pelham, a West Point cadet on the other side of the national schism. The changes they underwent led to profound repercussions in the country’s law, literature, politics, and popular mythology.  Don’t miss hearing about their lives and this new work that interweaves the historic and the personal beautifully and powerfully.

John Matteson received the Pulitzer Prize for Biography for Eden’s Outcasts: The Story of Louisa May Alcott and Her Father and the Ann M. Sperber Prize for The Lives of Margaret Fuller. A Distinguished Professor of English at John Jay College of Criminal Justice and the editor of The Annotated Little Women.
Debby Applegate is an historian and biographer. Her first book, The Most Famous Man in America: The Biography of Henry Ward Beecher, won the 2007 Pulitzer Prize for biography and was a finalist for the Los Angeles Book Prize and the National Book Critics Circle Award for biography.