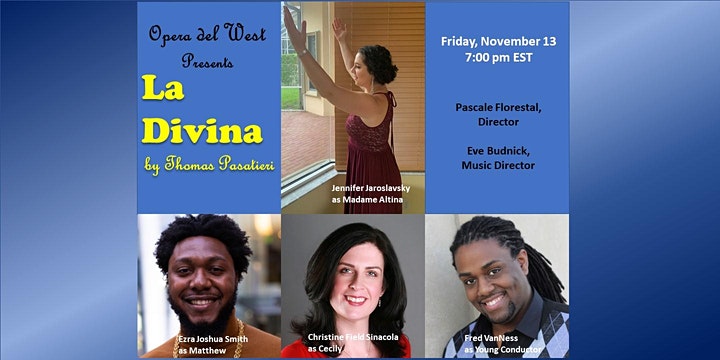 Although not a PANE event, this should be a fun online evening with music directed by Eve Kochen Budnick ‘84.

Opera del West received such great acclaim for our last virtual opera, Zoompresario,  that we decided to offer you all another one!
La Divina is a 30 minute comic one act opera by Thomas Pasatieri, one of our favorite living composers here at Opera del West  We are lucky to have Mr. Pasatieri join us during our Zoom talkback after the production.

La Divina tells the story of an aging diva who is planning a farewell performance with the help of her manager, personal assistant, and conductor.  Jennifer Jaroslavsky, who has played the title roles in our Alcina and Cenerentola, gives plenty of dramatic and hilarious moments as Madame Altina, with the support of OdW newcomer Ezra Joshua Smith at her calming manager.  Christine Field Sinacola, who has played many maids and mothers for us in shows like Little Women, Marriage of Figaro, and Cendrillon, brings an overwhelmed energy to Cecily and Fred VanNess rounds out the cast as the young conductor who is competing for the audiences attention.  Fred portrayed Pangloss in our Candide, and Tamino in The Magic Flute.

We are happy to have a new director join our roster for this production, Pascale Florestal, who has directed plays and musicals throughout the professional theater scene in Boston.