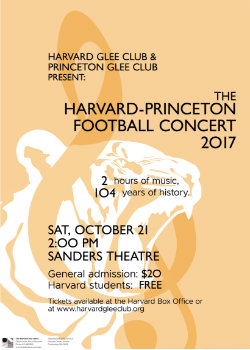 Join us for the 104th annual Harvard-Princeton Football Concert on Saturday, October 21 at 2:00 PM in historic Sanders Theatre! Following a century-old tradition, the Princeton and Harvard Glee Clubs will have a face-off of their own after Friday's big game. The groups will be performing a variety of choral works, from Renaissance polyphony to American spiritual, from sacred Russian hymm to contemporary works and popular tunes. The concert will culminate with a rousing rendition of Princeton's fight songs to celebrate Harvard's inevitable defeat. Don't miss the Glee Club's first away-concert of the season!