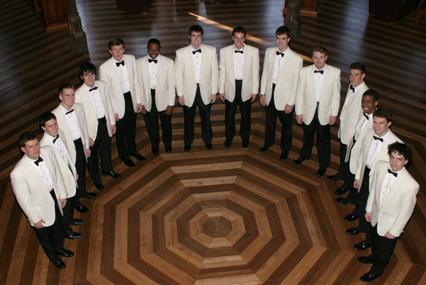 Princeton's Signature All Male A Cappella Group Since 1946

Come and join fellow alumni to hear the Princeton Tigertones on Saturday, March 23rd!  The one-hour concert will start promptly at 2pm and be followed by a reception with light refreshments.  The concert is open to all alumni, parents of students, family and friends.  Tickets are $10 and can be purchased at the door.  Please RSVP if you are planning to attend.

The Princeton Tigertones, founded in 1946, are Princeton's signature all-male a capella group. In the past 10 years, the Tigertones have sung in Europe, Brazil, Bermuda, and throughout the United States. Notable venues have included Carnegie Hall, Lincoln Center, and the San Diego Chargers Stadium. The Tigertones were recently honored with a trip to the White House, singing for President Barrack Obama and First Lady Michelle Obama.

With a constantly expanding repertoire ranging from traditional ballads and jazz to barbershop, Broadway, classic rock, and American pop, the Tigertones continue to entertain audiences of all ages and musical tastes. Whether performing for kindergartners in downtown Trenton, elderly audiences in Palm Beach or teenagers in Switzerland, the Tones and their songs have universal appeal. Many of these songs have been captured on the Tigertones' thirty-one recordings, the most recent of which, entitled "On the Rocks", was released in the fall of '10. Their latest album is "Neoclassics" and was released two weeks ago!